A few people have asked me before if the photos on my blog and in my books are real. Did we really eat that food and will it look like that when they make it? Well yes it really is the food we eat. I wanted to put together a blog and books that reflect what we really eat every day. Cooking for me is still a bit of a novelty as I came into it quite late. I enjoy cooking and so does Phil. We work well together in the kitchen as neither of us boss the other around. We learnt the recipes together, So help each other. Sometimes it’s a bit like that Morecambe & Wise sketch when they’re making breakfast.

I can say hand on heart the food in every one of our photos won’t be wasted. If we don’t eat it right after photographing it. It’ll be wrapped in foil and put in the fridge for lunches and dinners later in the week.

When we were shooting for Home Economics 2. I wanted to get it ready to print by the end of October, so I only had about 4-5 months of weekend and evenings to work on it as I have a full time job. Because I only had Saturday and Sunday to shoot with natural light, the nicest light, we sometimes had to shoot about 6-8 food shoots over the weekend. All these dishes became our meals over that following week. Nothing was thrown away.

I’m telling you all this because I want to prove that we never cheat with our food photography. It might look great, but that’s because Phil has a good creative eye, and as a designer I can visualise what it will look like on the page. 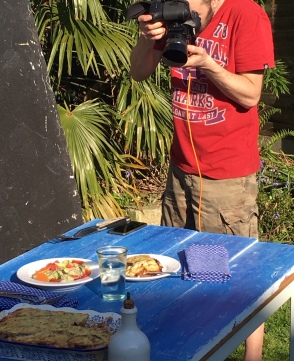 Phil has be taking photos of food for many years and in that time has picked up a trick or two from the many food stylists and home economists he’s worked with. We rely mostly on good lighting, and as I mentioned before natural lighting looks best. But there’s natural and natural. You’ve see the photos I put up on twitter half way through our shoots. And how there’s huge white boards taking up most of our kitchen. This is to deflect and reflect the light, so you don’t get harsh shadows. We’ll also use mirrors to Bounce light back into certain areas. It’s very subtle and it’s taken Phil years to perfect his skills

It’s true that when photographers are shooting for commercials and packaging they may mess around with the food. But unlike the old days before it was illegal to fake the food. Now they have to shoot the real ingredients. No more using mash potato instead of ice cream, no more glue instead of milk, but they may use yogurt instead, as real milk can be a bit thin. And they may use cardboard disc to add scaffolding to stop some ingredients collapsing. But that’s the same as a tiered wedding cake having dowels pushed into it to hold up the next layer. As long as you’re using the proper ingredients it’s fine.

Now days in food photography you have to use the real ingredients from the recipe. You can pick out the best bits of meat in the chicken pie and put them to the front by de-constructing and reconstructing the dish but you can’t add any more than would actually be in there. I’m told trading standards are quite Strict about this. 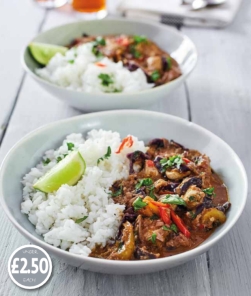 When you use good lighting it makes all the difference. But yes we really do eat the food we photograph.

With our food photography we don’t really have time to do too much to it. It get cold or wilts under bright lights quite quickly. Cheese is especially hard to shoot as when it gets cold it really shows, as it starts to contract and looks horrible. We have to get a stunt dish ready for those shoots, then quickly whip out the melted cheese dish and shoot like crazy.

The same with salads. You want them looking fresh but also have the glistening of dressing. We tend to put that out at the last minute and just spray a little olive oil over it, that way it’s still edible afterwards.

When shooting a hamburger or sandwich. We use cocktail sticks to hold the top layer of bread or bun up a bit so you can see the filling inside. They’re also good to hold fillings in place while you get that shot. We just have to remember to take them out. There’s nothing worse than biting into a delicious sandwich and finding half a cocktail stick in it.

We use chopped parsley or coriander quite a bit as it gives the dish a pleasing colour of green to help it look fresher. Salt and pepper also looks better when you can see the crystals and bits of pepper corn too, it adds interest and texture to the dish.

Sometimes the food that photographs shoot for commercials won’t be cooked as much as they like to keep it looking plump. We sometime have to do that too. I’ll know how long sometime takes to cook, but will bring it out a few minutes early for the photo. Afterwards I’ll always finish cooking it so that we don’t waste anything.

A lot of the time when photographing food you might want steam coming off it. Well you don’t want real steam as you’ll never see the dish as it’ll look out of focus which is no good, instead a lot of home economists will soak a cotton wool ball or the like in water and microwave it to produce steam that can then be placed behind the dish, your eyes just sees the steam and thinks it’s coming from the meal. Clever.

So now you know a few of the tips of great food photography you’ll never look at a hamburger advert the same way again.